#SDCC went so viral. We could see Gal Gadot, Ryan Reynolds and many other celebrities were posting pictures on their Instagram handle along with hash tag SDCC. So lets get to know SDCC and its background! SDCC- “San Diego Comic Con International” was started in 1970 by Shel Dorf, Ken Krueger and Richard Alf a group of movie, comic and science fiction fans organized first comic book convention in south Carolina. It was a one day event called as San Diego’s Golden State Comic-“Minicon” on 21st March, 1970 at U.S. Grand Hotel in the downtown of San Diego. So the main purpose of this single-day event i.e. “Minicon” was to raise fund as well as create interest for a larger convention, they also invited two special and important guests-Forrest J Ackerman and Mike Royer. It was a big hit since there were 100 attendees and this led to a three day San Diego Comic-Con on 13th August, 1970 i.e. the same year at U.S. Grant Hotel, renowned people in the comic industry were invited as guests such as Jack Kirby, Ray Bradbury and A.E. Van Vogt, attended by 300 people that featured film screenings, dealer’s room, panels and programs. Apart from these featuring, they also added popular arts that deserved recognition which includes literature/sci-fi/fantasy. In 1973, it received its official name from San Diego’s West Coast Comic Convention to “San Diego Comic-Con” with the fourth annual event. And finally in 1995, non-profit event changed its name to Comic-Con International(San Diego CCI). After showcasing these events in EI Cortez Hotel in downtown San Diego in 1970’s but Comic-Con shifted to the Convention and Performing Arts Center (CPAC) in 1979 and stayed till 1991, when finally new San Diego Convention Center was opened. It grew that included satellite locations, local hotels and outdoor park. With the increment in the attendees apart from programming events there were games, anime, Comic-Con International Independent Film Festival and Eisner Awards took place in the Convention.

Comic-Con gained a lot of popularity since it gave an experience of giant Exhibit Hall spread across 460000 sq.ft., vast programming schedule that not only featured comics, popular arts, hands-on-workshops, educational and academic programming such as Comic Arts Conference, film screening, Masquerade Costume Competition, an Autograph Area, Art Show and Portfolio Reviews i.e. uniting artists as well as renowned companies. And When the list of guests comes up then you will find comic creators, actors, directors, producers, publishers and many more. They have conferences in panel and also collaborate with their fans to celebrate and have fun. This year too SDCC (July 19-22, 2018) received many responses online as well as offline and grabbed attention of many, it featured many celebrities, directors, producers and people celebrated this event for full four days!

Lets have a look at few Instagram pictures of Celebrities and Comic Fans! 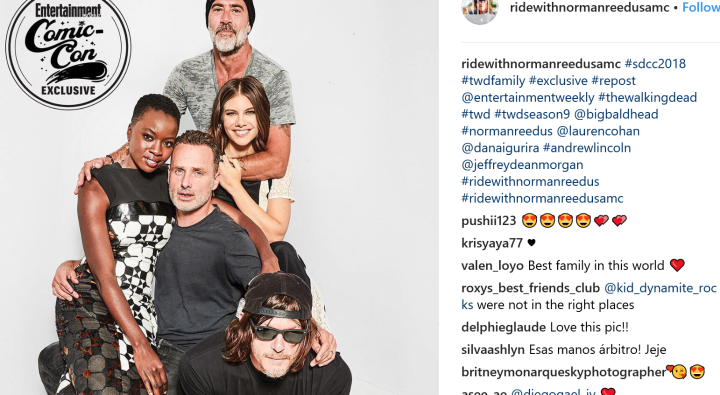 To be a part of this event, you can send the application by filling form that is available on their website. Also regarding the schedule, guide and many more. You can check out the link for having a look at the Comic-Con Trailer: https://youtu.be/fhVwvA68mSM

So guys this is all on SDCC, will be back with more information on the same. Thank you and See you soon with my new blog!